“Looking Back To Face My Scoliosis” by Vicky Grogg 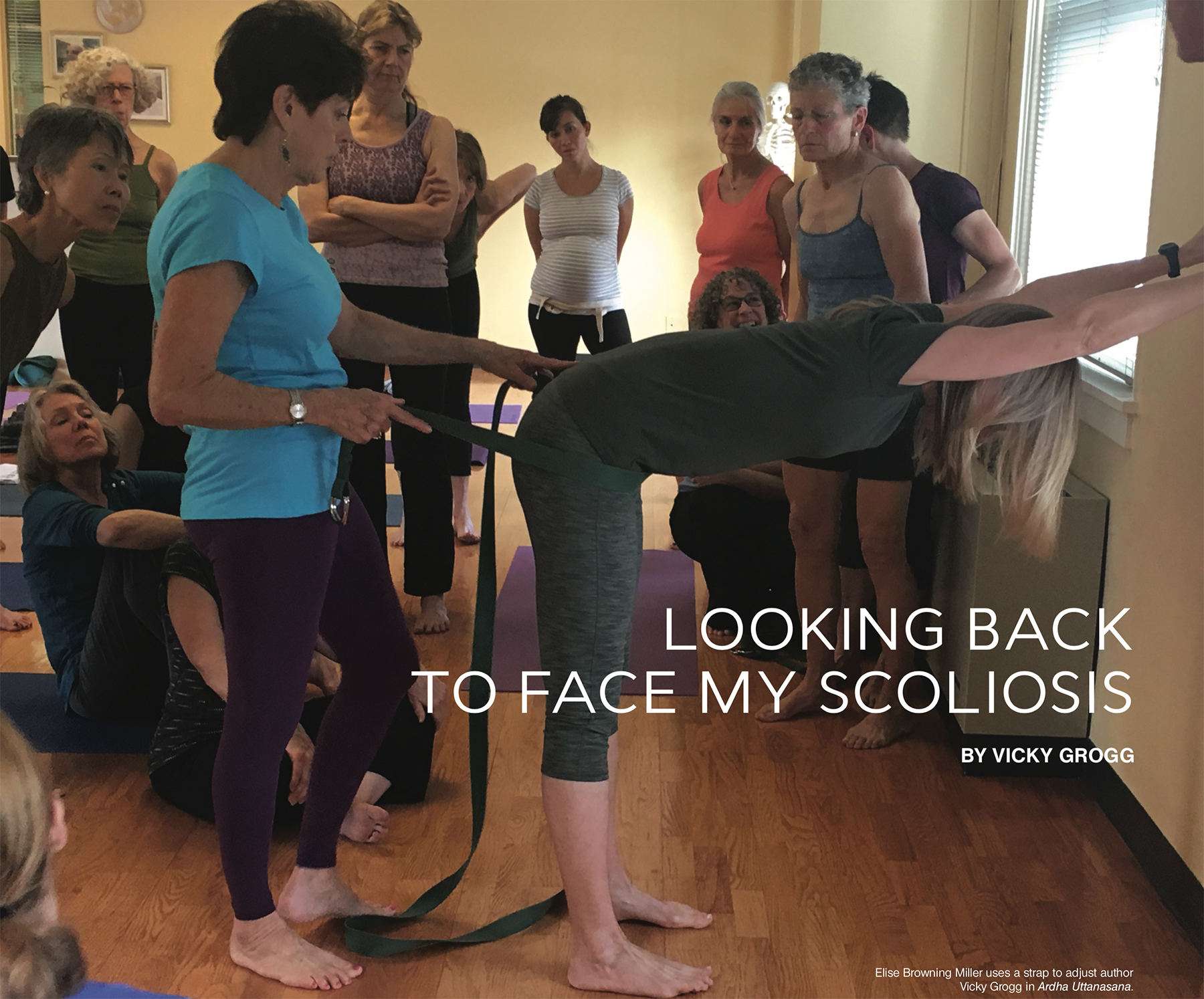 I never thought of my scoliosis as that bad. Yes, I wore a brace to straighten my spine throughout most of high school, but it was a space-age plastic design that extended from below my chest to just above my hips, the type that I could hide under my clothing. I became skilled at selecting artful and loose clothes—something easy to do in the mid- 1980s—to conceal the fact that I was wearing a bulky contraption 23 hours a day.

After three years of wearing the brace, I was finally free of it. Like many people with scoliosis, I thought I was done or “fixed,” and I put the whole experience behind me.

Nearly 25 years later, I found myself experiencing lower back pain on my left side. It wasn’t debilitating, but it was annoying and present all day. After trying unsuccessfully to find relief in yoga and looking for answers in books that explained back pain as an emotional trigger,

I went to a primary care physician who was familiar with yoga.

During my office visit, the doctor immediately saw my spinal curves and reminded me that they were significant and likely contributing to my pain. He determined that X-rays and other diagnostic testing wasn’t needed. Instead, he summed up by saying, “Because of your scoliosis, you would be in a great deal of pain if it weren’t for your regular yoga practice.” At this time, I had been practicing Iyengar Yoga for 15 years.

The doctor prescribed physical therapy to strengthen my core muscles and told me to keep practicing yoga but to stay away from deep back bends until my back felt better. The physical therapy exercises were intended to strengthen my back and core muscles, and I found some of the movements similar to Setu Bandha Sarvangasana and Salabhasana. They helped me a little bit but not enough to keep paying for the physical therapy sessions that were not covered by my insurance. Again, as life became busy, I relegated my lower back pain to a low priority on my long to-do list and forgot about my scoliosis.

Fortunately, I recently had another opportunity to tune into what my body was trying to tell me—this time in the form of a yoga workshop. Elise Browning Miller, who has an MA in Therapeutic Recreation and is a senior Certified Iyengar Yoga Teacher, was coming to teach at the studio where I regularly take classes, Jewel Yoga (formerly Julie Lawrence Yoga Center) in Portland, OR.

Intro to Yoga for Scoliosis

The promotional flyer for Elise’s workshop, called “Intro to Yoga for Scoliosis,” promised the class would identify the different types of scoliosis and “how to adapt yoga poses with breath awareness to improve structural alignment and relieve pain.” Eager to find a break from my ongoing pain, I quickly signed up for the workshop.

At the beginning of the three-hour class, Elise explained the four typical patterns of structural scoliosis, which are caused by uneven growth to the sides of the vertebrae during the juvenile and teenage years, deformities at birth, or as a result of an accident. Structural scoliosis may be diagnosed at any time from birth into young adulthood. Most cases are diagnosed during adolescence. When X-rayed, if the spine shows a lateral (or sideways) curve of more than 10 degrees, it is considered scoliosis. However, imbalances usually are not noticeable until the curve is more advanced at 20 degrees or beyond.

Next, Elise went on to differentiate structural scoliosis from functional scoliosis, a condition that can cause pain and influence the spine after years of repetitive action but is not a congenital spinal distortion. Once everyone in class understood the various patterns of scoliosis, she helped us identify the pattern of scoliosis we each have so that we could modify poses based on the specific location of the convex and concave curves of our spines.

To identify everyone’s curve pattern, Elise asked each student to bend at the waist for the Adams Forward Bend Test, an accepted method to determine structural scoliosis. When it was my turn, my mind went back to the day in middle school when the gym teacher did the same test, and I was sent to stand with the small group who needed further evaluation. As Elise traced my curves with her index finger, I remembered the physician explaining where my curves are and how my spine also twists closer to my lumbar.

Elise suggested that I had a “right thoraco-lumbar” pattern, or what’s commonly known as a “C” curve. It’s the longest of the four major curves and the curve starts at the bottom of the shoulder blade and arcs down into the lower back. When I looked at the picture in the handout she provided, my X-rays from so long ago and the shape of my brace came flooding back to me. It all made sense. Yes, this was definitely my pattern.

Some people in the class were already intimately aware of their curves, citing the exact degree of each bend (a measurement called the Cobb Angle Measurement taken by a physician, the severity of which determines whether a brace or surgery is recommended). Yet just as many people were like me, choosing to forget they had any spinal deformity until pain forced us to remember.

It was cathartic to see so many people in the same room who live with scoliosis and struggle daily with compression and discomfort. And it was humbling to see so many people coping with spinal curves far greater than mine. Most important, it was a relief to know that even basic yoga asanas can help if they are practiced accurately for your pattern of scoliosis.

After 40 years of teaching and practicing yoga, Elise knows that yoga can help alleviate pain and symptoms of scoliosis. However, she makes it clear that yoga does not and should not replace your doctor’s recommendations. She is also careful to tell teachers not to give medical advice to their students. Instead she advises, “Give empathy, not sympathy, to your students. Empower them to do something for themselves.”

As Elise taught, the importance of lengthening, breathing, and strengthening a body with scoliosis became clear. She suggested that we lengthen our backs by using a rope (or a strap around a doorknob) around our hips and stretching our torso and arms forward with our hands on a chair. As space is created, you can slowly take your hands to blocks and eventually the floor.

In her new book, Yoga for Scoliosis: A Path for Students and Teachers (www.yogaforscoliosis.com), Elise presents another method of lengthening a back with scoliosis, called the “Three- Part Kitchen Sink Pull” (see image). This trio of modified poses—Downward Facing Dog, Chair, and Garland—can be done anywhere there is a sink, and it works as a simple way to get spinal traction. I feel instant relief from pain when I do this and have incorporated it into my daily practice.

During class, Elise taught new ways to think about familiar poses such as Parivrtta Trikonasana, Prasarita Padottanasana and Bharadvajasana and how different movements and different focus points influence the curves in our backs. For example, in Prasarita Padottanasana, I need to bring my hip back strongly on the left side to lengthen my back evenly. While many teachers have told me to take my hips back in this pose, those instructions made more sense to me after I gained a clear understanding of the curves in my spine.

Another “aha” moment for me came when we did Parsvottanasana. For the past couple of years, this has been my favorite pose to avoid. I don’t feel pain while in the pose, but I always feel lower back discomfort on my left side after I come out. I shared this with Elise, and she suggested that I do the pose using a rope around both hips in an effort to lift and stretch back the left hip. Because of my pattern of scoliosis, my left hipbone is higher than my right hipbone, and this naturally creates a shorter left side that is challenging for me to correct on my own. Working with the rope has noticeably changed the pose for me. It’s still not my favorite, but it’s one I no longer dread.

In hindsight it seems obvious, but difficulty breathing is an issue that I never related to scoliosis. I regularly hold my breath and can attribute irregular breathing to stress and anxiety; however, my physical make up may also contribute to an unevenness of breath. Looking at X-ray photographs of ribs in people with scoliosis in Elise’s book and handouts, it’s clear how the ribs can be affected by scoliosis. Typically one side of the ribs is collapsed while the other side is overextended. This imbalance creates breath restriction on one side and usually leads to the opposite lung taking on the majority of breathing duties. Lengthening and practicing breath awareness or pranayama every day is important for everyone, and it can be especially helpful for people with structural scoliosis.

Finally, Elise shared poses that strengthen core muscles and our backs. A couple of the asanas reminded me of the physical therapy poses I was given years ago but stopped practicing. Returning to poses such as Salabhasana and Setu Bandha Sarvangasana with my rediscovered “curve awareness” is helping me build strength and stamina in areas that are weaker from my scoliosis.

Elise ended the workshop by sharing one of her guiding principles, “Don’t let what you can’t do interfere with what you CAN do.” They say you find teachers and the lessons you need only when you’re ready to hear them. Thirty years after being diagnosed with scoliosis, I think I’m finally ready to listen.

Vicky Grogg took her first Iyengar Yoga class in 1996. She lives in Portland, OR, with her husband, dog, and two cats.

Here you can create the content that will be used within the module.